Dark Forest v0.6 Round 2: Inspire Hallowed has concluded! Thank you all who participated and congratulations to the winners.

Nearly 1900 players participated in this round. Of those, 800 players earned their invite key to the next round (the date of which is yet to be announced). 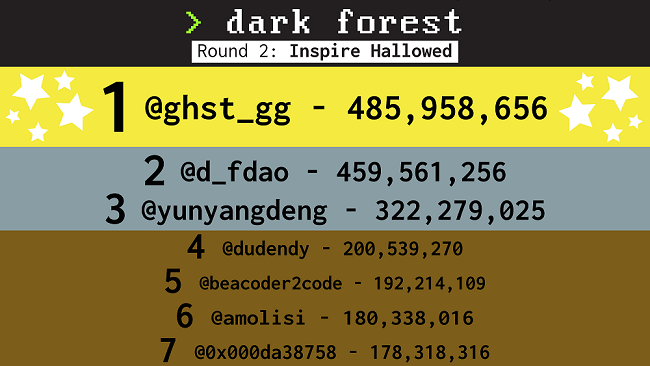 This round saw the highest level of competition we’ve seen thus far, and the latter half had a handful of players fighting neck and neck for the top spot with multiple players surpassing 200 million points. In the final days, @d_fdao campaigned for new allies to donate their Foundries and empires to their cause, with the goal of locking in first place. However, @ghst_gg also came to play and got several other high-ranking players to donate their Foundries and empires to him, giving us all the opportunity to observe an intense race between the two for first place.

At the end of the round, @ghst_gg took 1st place with 485 million points, @d_fdao took 2nd place with 459 million, and @yunyandeng got 3rd with 322 million. And this was all over a nine-day period of time! @d_fdao tweeted their concession shortly before the round ended, while @ghst_gg celebrated their victory.

For reference, @adietrichs won the previous Dark Forest round by reaching 300 million points over a two-week period, though artifact discoveries were not counted towards point totals in that round.

While @ghst_gg is presumably an individual player, @d_fdao is a DAO. DAOs and alliances exist both inside and outside of Dark Forest - they are a natural evolution to permissionless blockchain architecture, and we’re excited to see how things develop further. 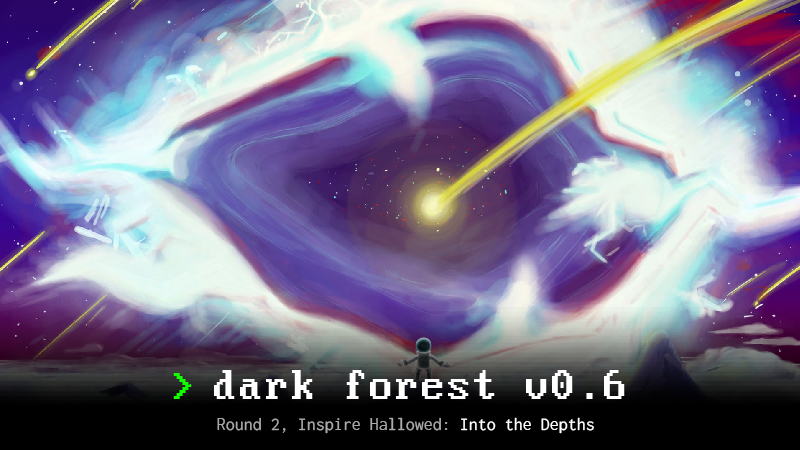 In addition to the nail-biting race for first, Inspire Hallowed was full of interesting occurrences:

The top 63 players will be awarded planet NFTs in Valhalla on the Ethereum mainnet. If you won a prize, we’ll send an email to you in the near future with instructions on how to claim it. These NFTs can be inspected on Etherscan and OpenSea.

Similar to the previous round, we’re awarding a number of special prize NFTs as well to individuals who contributed to Dark Forest in especially creative or community-minded ways. These prizes were awarded by the developer team with input from a few community members. They aren’t meant to be an exhaustive listing of all community projects; rather, they’re meant to highlight a sample of community contributions that we thought were especially cool.

As with the top 63 prize winners, we will email the special prize winners with instructions on how to claim them in the near future.