Dark Forest v0.6 was announced on May 21, 2021. In the 9 months since, we’ve launched four official rounds, seen the first Dark Forest DAOs take shape, and enjoyed watching a handful of community rounds spawn.

We’re happy to share that the final round of Dark Forest v0.6 - Round 5 - will be launching on Friday, February 18, and will end ten days later on Monday, February 28. Make these final ten days of v0.6 a fun one. 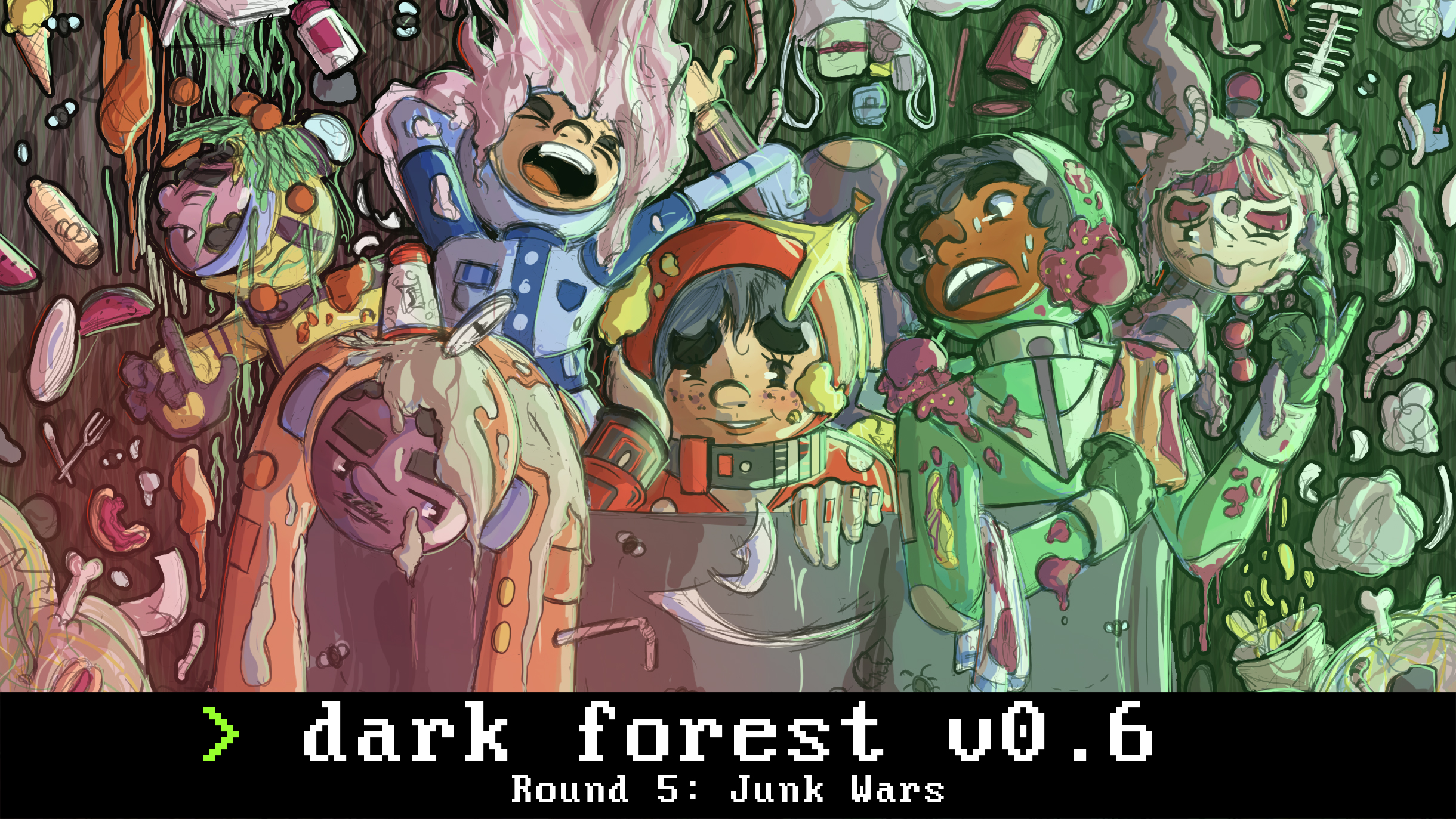 Scoring for this round will be multi-faceted. Two scoring mechanics are familiar - you may accrue score by withdrawing silver from Spacetime Rips and discovering Artifacts. There will also be a third, new scoring mechanism that will be based off of the territories that you control.

How to gain score via territory control:

CAPTURE ZONES will periodically appear as circles overlaid on the map. These capture zones move every 256 blocks (~30 minutes). 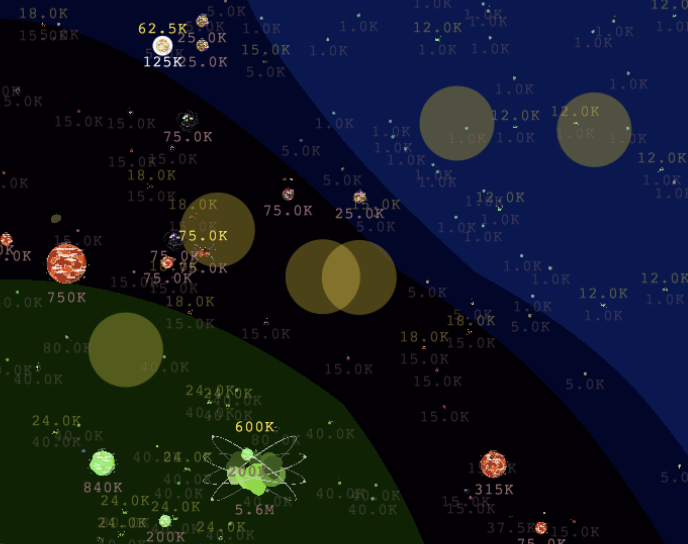 Planets within capture zones will be susceptible to INVASION.

To invade a planet within a capture zone:

Once an invasion has begun, the countdown will continue even if another player becomes the owner of the planet - whoever owns the planet at the end of the countdown has the ability to claim the invasion score.

Score yielded from invasions is relative to the level of the planet. (Higher level planets = exponentially more invasion score!)

Every player will spawn into the universe with 5 spaceships orbiting their home planet.

Spaceships are intended to add another dimension of gameplay to Dark Forest. They each come with unique properties, and we’re excited to see how you use them.

Ships can move from planet to planet without spending energy. To do this, select a planet and then select the ship you’d like to move. That planet’s energy bar will be disabled as energy is not required to move ships.

Spaceships automatically apply their effects to any planet they arrive on (with the exception of the Gear/Crescent, which need to be activated). Multiple spaceships on the same planet will even compound their bonuses!

All planets in the universe are now filled with Space Junk. Sending energy to an unclaimed planet will take the junk from that planet and add it onto your junk total! If you reach your junk limit you will have to Abandon some planets or find some planets that already have their junk cleared… 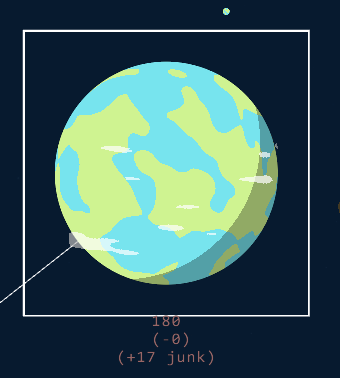 We wanted to introduce a mechanic that encourages players to make informed decisions about where they travel and how large of a corner of the universe they conquer - and not only this, but to see what new types of interactions may occur between players as a result. This is an entirely new mechanic that will likely evolve over time - we’re eager to hear your thoughts.

You now have the option to Abandon a planet that you control. This function is a companion function built alongside Space Junk, and is a method of both helping you manage your space junk but also as a function that can be used strategically.

All your transactions will no longer pile up on the top right side of your window. Instead, they now live within the dedicated Transaction Log!

This transaction log serves as a method to at-a-glance get an overview of your activity. You can even speed transactions up, retry them if they fail, and cancel pending transactions. 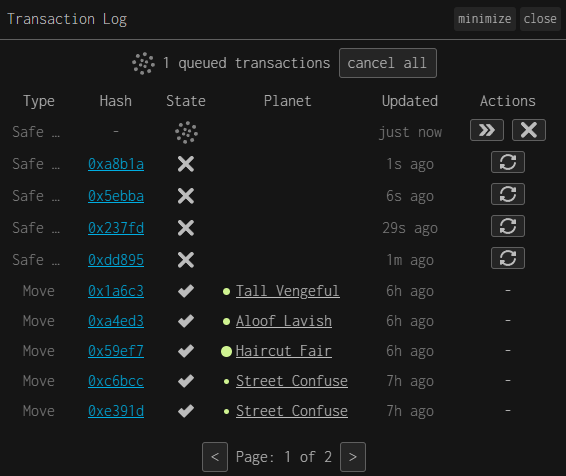 You can get to the Transaction Log by clicking the button on the left panel of the game, or with the ` hotkey.

Whitelist keys for this round will be emailed to all players who successfully scored points in the previous round, in addition to a random subset of the waitlist.

As in the previous rounds, the top 63 players will be awarded Dark Forest NFTs in Valhalla. Special prizes will additionally be awarded at the discretion of the developers for particularly creative or community-oriented projects.

Don’t want to play super competitive this round but still want to win prizes? We’ll be hosting a plugin contest during this round - more details TBD.

The timing of this round means that we will be launching LIVE during ETHDenver, and we’ll update the open-source code/contracts once we kick off the round! We’re hoping to see some friendly faces battling away in the universe in person! Find us if you want Dark Forest stickers. 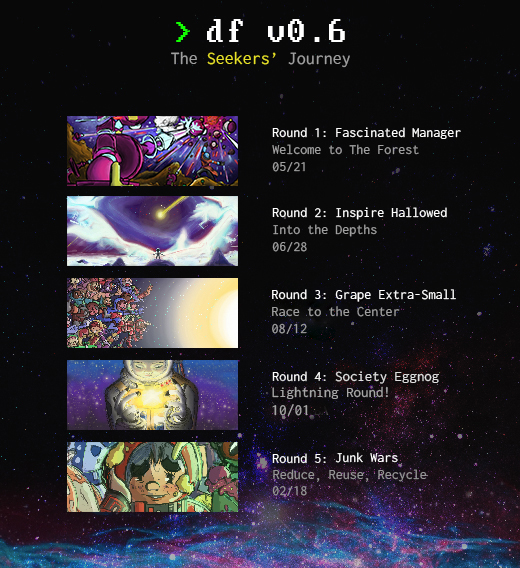